Stools for focus and rockers for lounging, designed in Stonington and made to last 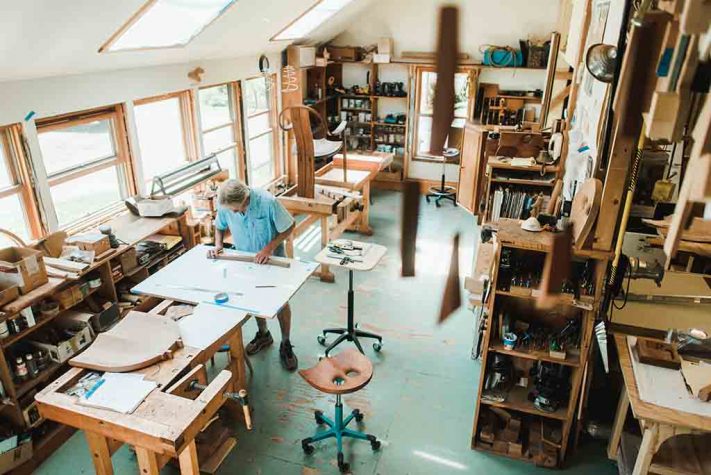 Geoff Warner had been daydreaming about the rocking chair for decades. He knew, he says, that a rocker would be part of his artistic legacy someday; he just didn’t know when. The Stonington-based furniture designer kept getting distracted by more pressing projects and tasks. Like meeting with other craftspeople, starting a business, filling orders of Owl stools, and running workshops. He’d revisit the rocking chair idea every now and again, but it wasn’t until 2019 that he finally carved out the time to create a prototype. “I didn’t have time to do mock-ups,” he says. “A furniture show was coming up. I had to focus. I had to block out everything else that was in my head.” Warner had a deadline. He gave himself two days to complete the chair. Two days without anyone else, two days of music (Grateful Dead, Beatles, whatever happened to be on WERU) and hot tea and late nights and early mornings. “I had to get some sleep because I can’t do all-nighters anymore,” he explains. “But it was really intense.”

As we speak, he’s sitting in the newly named Warner Rocker, the result of his 48-hour workshop immersion, and watching wood crackle and burn in the woodstove in his island home. “It was a really cool experience,” he reflects. “It took me back to the days before I was an entrepreneur driving my company.” The chair, he says, feels wonderful. Made of cherry, it gleams red in the glowing firelight as he moves back and forth, back and forth, contemplating his professional life.

Warner has been making furniture since the early 1980s, first as a studio furniture maker then as a business owner. He learned his craft at Rhode Island School of Design, studying under Danish modern designer Tage Frid. “My dad was an architect, and my mom was a painter,” he adds. “You could say I had it in my blood. Growing up, my two mentors were my dad, William Warner, and Tage Frid.” Although he had “a few rare carpentry jobs,” for most of his life Warner has worked for himself. His approach to his medium shifted slightly in 2008 after the economy crashed. “I called meetings with other artists and craftspeople from Stonington and Deer Isle,” he remembers. “I called them ‘out-of-the-box’ meetings. We came together to talk about what we could do to survive.” There, he found inspiration for his first big design, the Owl stool. “The creative synergy I found at the meetings was so important,” he says. “I took that energy, and from there the Owl stool evolved.”

Warner’s goals in designing the Owl stool were simple. First, he wanted to make something affordable and easy to replicate. He wanted to be able to sell this piece at farmer’s markets and craft fairs to walk-by customers. Second, he wanted the object to be comfortable. “I started with a regular-shaped wooden seat with no contours,” he says. “As I sat on it, I said, ‘Wow, I did not realize that my sit bones protruded so much,’ and so I started to carve it.” He put two holes into the seat, one for each bone. “I shaped it, and I got it so that it felt very, very comfortable to me,” he says. He showed it to a fellow craftsman, who took one look at the negative space and said, “That looks like an owl.” Hence, Warner says, “the Owl stool.”

The Owl stool has changed over the years, but its seat remains the same. After hearing feedback from his customers, Warner decided to offer the stool on wheels. Then with a metal base. Then he began to offer stools with metal bases painted in a series of six “brand colors.” These colors, which are applied at Performance Product Painting in Auburn, are inspired by woolens available at Seacolors Yarnery in Washington, Maine. “We were at a show together, and I saw Nanne Kennedy’s yarn, which she cures herself at her farm, Meadowcroft,” he says. “I saw the colors and thought they were beautiful, and she let me use them as inspiration.”

Although Warner is excited to branch out with his rocker—“it was really time to develop something new,” he says, “both from a business perspective and personally”—he will never abandon the Owl stool. The simple design has stood the test of time, thanks to its minimalist look and ergonomic structure. Warner has been able to outsource much of the construction to trusted companies. Hewes and Company of Blue Hill makes the seats on a CNC machine, a Massachusetts-based business creates the stacking frames, and Warner and his small team of employees finish them in Stonington. “The mission is to share the idea with the world,” Warner says.

Soon, hundreds of new backsides will perch on Owl stools. In the winter of 2019, Warner received a grant of $15,000 from Maine Technology Institute to create a plastic injection-mold version of the stool. “We’re gearing up to make our first batch of 100 right now,” he says. Market research revealed that the stool would be particularly useful in specific settings: healthcare, dental care, and education. “For me, the most important market for our stools is schools,” Warner says. “Those injection-molded seats that are in most high schools and elementary schools are atrocious and contrary to sitting in a healthy posture. It’s a great opportunity to inspire young children to sit in an engaged posture.” Since most of us spend the bulk of our waking hours sitting, Warner believes that by changing how we sit we can change how we function on a larger level. “It would be a step in the right direction to have students sitting up straight,” he muses as he rocks at home. “I think we’re right at the forefront of something. Something good.” 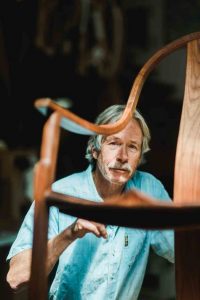 Woodworker and furniture-maker Geoff Warner stands in his Stonington studio behind his newest ergonomic design: a cherrywood rocking chair. 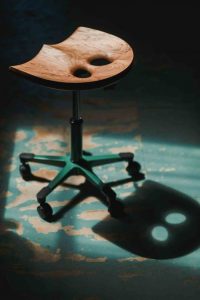 After the 2009 financial crash, Warner set out to create a simple, easy-to-replicate design. The result is the Owl stool, which has two carved holes for the sit bones and now comes in multiple colors and finishes.